It has been a hard couple of weeks. I turned to the spirit of my great-grandmother often through the worst of it, asking for her companionship and hoping that her faith in me not be mistaken.

Since she was on my mind so heavily, I ended up making two of her favorite dishes - mutancana (also Romaized mutanjana) and paprikash.

Mutancana is traditionally made with mutton (hence the name), cooked in fruit and honey. My great-grandmother’s recipe is her version and is not fully traditional, as she altered it through the years to suit her preference. I used lamb, as no butchers near me were selling mutton. It is a little sweeter made with lamb, without the particular musky flavor of mutton, so I add a little more spice than usual.

There are… many, many ways of making paprikash. Please do not treat this as the absolute. The only thing I will advise is finding real, authentic Hungarian paprika (which is also needed in my goulash recipe). Hungarian paprika is traditionally available in eight different flavor profiles, from the mild bright red Hungarian paprika to the spicy, pungent, and pale orange Paprika. The easiest to find in the United States is the bright red variety called édesnemes, which has a pungent peppery flavor.

It really isn’t necessary to use that many different kinds. I would just recommend a good Hungarian one, if possible.

Preheat the oven to 325 degrees Fahrenheit. Cut the lamb into larger than bite pieces. Blot the lamb dry with a towel. Salt and pepper generously, then scatter over with cornstarch. Toss the lamb in the cornstarch until it is well coated.

Heat the aromatic oil and butter together in a large Dutch oven or similar oven-safe casserole-style cookware until it is combined and shimmering.

In batches, brown all the lamb pieces on all sides golden brown. Remove from the pan and deglaze the fond using the alcohol of choice, optionally setting the alcohol alight to flambé the oil, butter, and browned bits into a rich and flavorful liquid.

Put the lamb back into the pot and cover, leaving a small gap in the placement of the lid so that the lamb braises, rather than steams.

Put into the oven for 3 ½ to 4 hours, occasionally turning the lamb so that it cooks evenly.

Remove the stone from the dates and chop. 1 hour into the cooking time for the lamb, add the dates and stir to combine, before replacing the lid to the pot and continuing braising.

When one hour remains on the cooking time, add the black rice to the Dutch oven, stirring to make sure it is fully submerged in the liquid in the pan. Continue braising.

Break down the whole chicken into pieces, blot dry with towels, and salt and pepper thoroughly. Reserve the wings, spine, and ribcage for making chicken stock.

Chop the onion and the bell or sweet peppers to bite-size (if using bell peppers, remove the seeds, if using sweet peppers they can remove). Mince the garlic.

Melt butter in a braising pan over medium-high heat until shimmering, then add the chicken pieces and brown on both sides until they easily lift from the pan and the skin is crisp and golden.

Remove the chicken and set it aside. Add the onions and peppers to the pan and saute until the onion browns just begins to soften, then add the garlic and saute together for an additional thirty seconds, being careful not to let the garlic burn.

Lower the heat to medium-low and add the paprika. Stir to combine and cook together briefly, until it coats the vegetables and darkens, but does not burn - paprika burns easily, so stay with the dish and stir frequently.

Bring the heat back up to medium-high and add the chicken stock, then add the tomatoes and simmer, covered, for ten to fifteen minutes, or until the tomatoes have burst and softened. Smash the tomatoes to create a sauce. Add the chicken pieces back in, making sure they are covered to at least halfway to most of the way up the side, adding more chicken stock if needed to ensure there is enough liquid.

Place the lid back onto the braising dish and simmer on low for two and a half hours.

Optionally, at the end of the cook time, the lid can be removed from the braising dish and the entire dish broiled for a few minutes to ensure some crispier skin.

Mix in the remaining cup of flour and knead for 7 minutes, or until the dough becomes soft and elastic, but may still be somewhat sticky to the touch. Cover the bowl and let the dough rise until doubled, 45 minutes to 1 hour.

After the first rise, shape the dough into an oblong loaf. Place in a greased 9" x 5" or 10" x 5" bread pan, cover with greased plastic, and let rise until almost doubled, about 60 to 90 minutes.

While the dough is rising, preheat the oven to 375°F. When the dough has almost doubled, brush or spray the top with water, dust with pumpernickel or rye flour, and score (slash) the top.

Bake the bread for about 35 minutes, until it sounds hollow when you thump the bottom, or the inside measures 205°F on a digital thermometer. Remove the loaf from the oven and cool it on a rack before slicing. 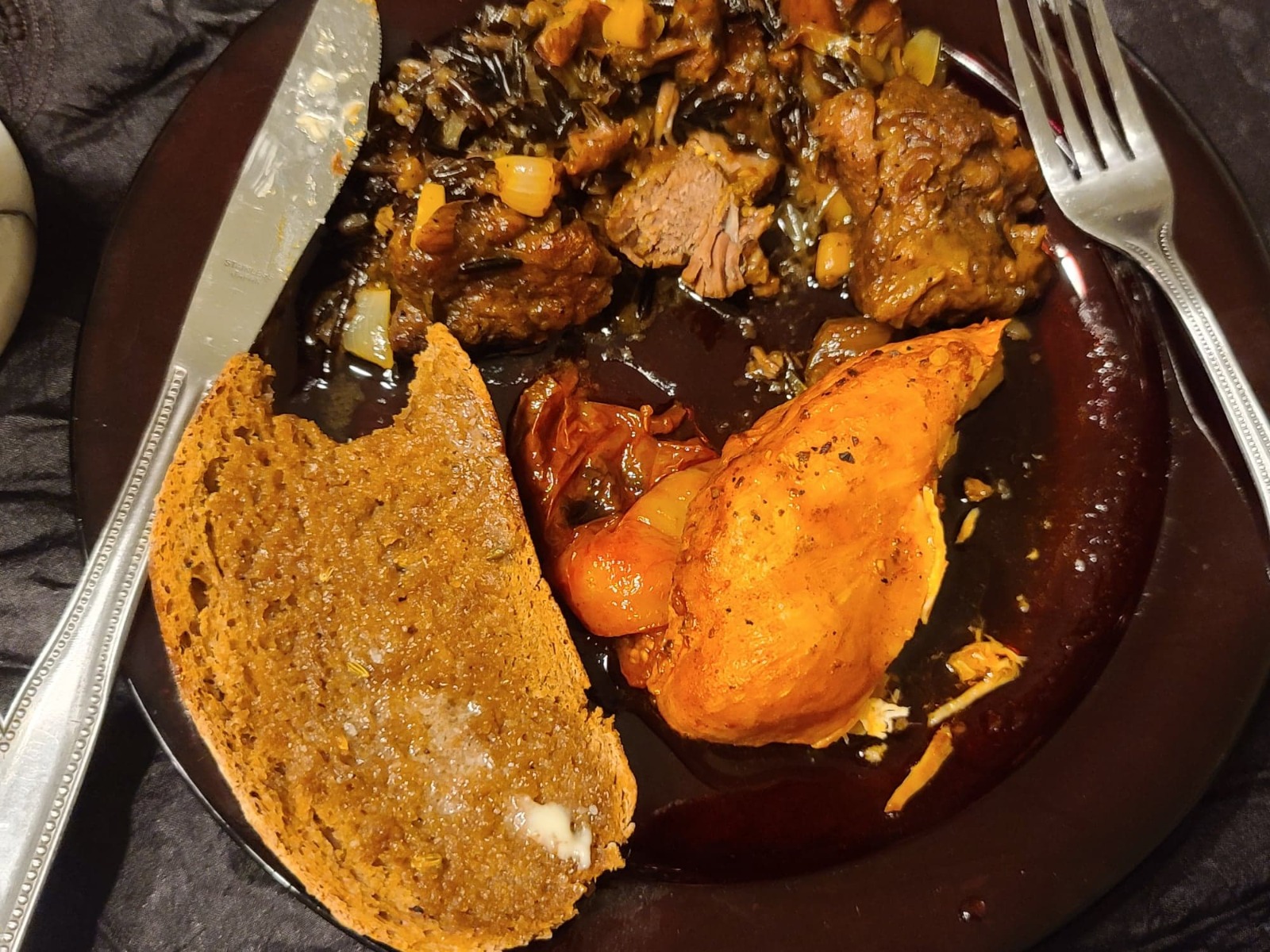